DESERT NEAR THE END

The band was formed back in 1997 by Akis (bass) and Alexandros (vocals) in Athens, Greece. It took many forms and names and they released three demos and one album until 2005 under the name Eventide.
After the completion of their first album, the line-up was dissolved by musical differences and the two remaining and original members decided to keep their music alive and continue under a new name. They carried all their mid-90’s influences and started to forge a new path across the desert… and so, Desert Near The End was the name! The first part of their journey titled “A Crimson Dawn” was self released in 2011.
In 2012 the line-up was completed when Thanos (guitar) joined in and the band was ready once again to perform live… and so they did! They shared the stage with many bands in 2013 and 2014 promoting “A Crimson Dawn” while at the same time worked on the next two albums bringing the story which started in the first album to its conclusion.
The second chapter of trilogy, called “Hunt For The Sun”, was released by Ukrainian label Total Metal Records on the edge of 2014-2015 year.
The third chapter, album “Theater Of War”, was mixed and mastered by Tue Madsen (The Haunted, Heaven Shall Burn, etc.) at Ant Farm studio. The album features band’s most Extreme approach musically and lyrically brings the story to its conclusion. It was released in Autumn 2016 by Total Metal Records. 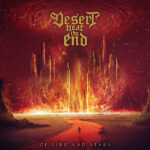 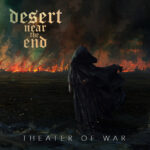 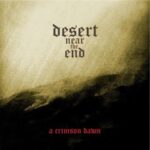